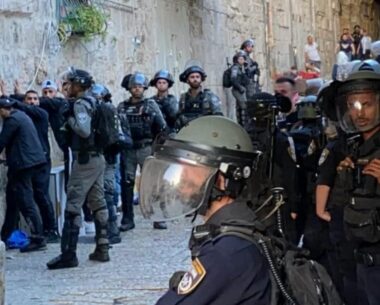 Israeli police officers attacked on Sunday at dawn, dozens of Palestinian worshipers while leaving the Al-Aqsa Mosque in the occupied capital, Jerusalem, wounding at least ten.

Eyewitnesses said the police attacked the Palestinians, in addition to firing rubber-coated steel bullets, gas bombs, and concussion grenades at them.

The Palestinian Red Crescent Society (PRCS) said its medics provided treatment to ten Palestinians and moved one of them to a hospital after he was shot with rubber-coated steel bullets in the mouth.

The incident took place when hundreds of Palestinians were leaving Al-Aqsa after performing dawn prayers.

Also at dawn, a father and his four children were injured, after Israeli soldiers fired concussion grenades at them near Bab al-‘Amoud in Jerusalem.

On Saturday night, the army attacked many Palestinians in the Sheikh Jarrah neighborhood, in occupied Jerusalem, causing injuries, and abducted five.