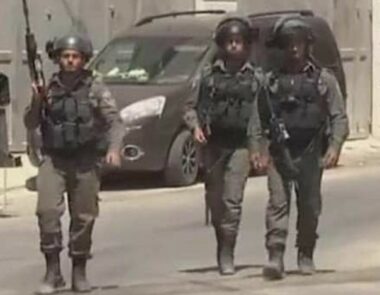 Israeli soldiers invaded, on Monday evening, the town of Ya’bad, south of the northern West Bank city of Jenin, and injured many Palestinians during ensuing protests.

They added that the soldiers fired several live rounds, wounding a young man in the arm, in addition to firing many gas bombs and concussion grenades, causing at least twenty to suffer the effects of teargas inhalation, in addition to cuts and bruises.

During the invasion, the soldiers assaulted a young man, identified as Soheib Kamal Abu Bakr, after forcing him out of his car, causing several injuries, in addition to Yazid Abu ‘Abed, who was injured after being rammed by an army jeep during the invasion. Both were moved to Ibn Sina hospital in Jenin.