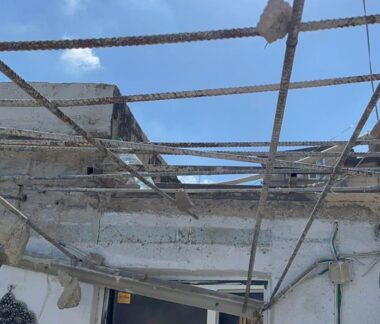 The Israeli authorities in occupied Jerusalem forced a Palestinian to demolish his home, Monday, in the Wadi al-Jouz neighborhood, under the pretext of being built without a permit.

Local sources said the Palestinian Ismael Aramin from Wadi al-Jouz, had to demolish his own home to avoid the excessively high fines and frees, in addition to the demolition costs, if the city used its workers and equipment in the destruction.

They added that the Palestinian tried to obtain the needed permits to build his home, and paid hefty fees in applications and appeals.

There have been numerous similar incidents in occupied Jerusalem this year alone, in addition to the ongoing threat of displacement of the Palestinians, especially in the Sheikh Jarrah neighborhood, due to Israel’s illegal colonialist activities and plans, including the takeover of homes.

It is worth mentioning that most construction permit applications filed by the Palestinians are denied, while the application costs could amount to hundreds of thousands of shekels.

On Saturday morning, a Palestinian family had to demolish its own home in the Wadi al-Jouz neighborhood, under the pretext of being built, 40 years ago, without a permit.

This is happening in addition to the complicated procedures the Palestinians have to go through, the very high costs of filing for these construction permits, and the extended periods the residents have to wait, and in most cases, they are denied.