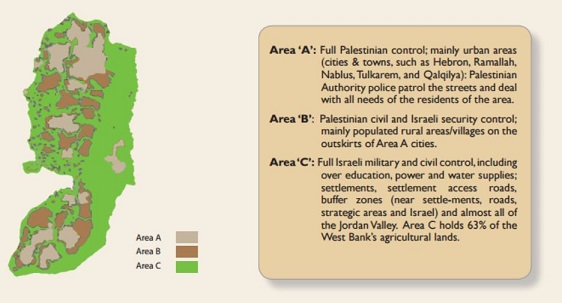 Furthermore, Israeli authorities forced, on Monday, a Palestinian in the Wadi al-Jouz neighborhood of occupied Jerusalem to demolish his own home under the pretext of the lack of a building permit, despite the fact that the house was built 40 years ago.

Any destruction by the Occupying Power of real or personal property belonging individually or collectively to private persons, or to the State, or to other public authorities, or to social or cooperative organizations, is prohibited, except where such destruction is rendered absolutely necessary by military operations.”

The Palestinian-owned lands in question were designated as “Area C” under the Oslo Accords of 1993 and 1995.

According to B’Tselem, the Israeli Information Center for Human Rights in the Occupied Territories states;

Area C covers 60% of the West Bank and is home to an estimated 180,000-300,000 Palestinians and to a settler population of at least 325,500 living in 125 settlements and approx. 100 outposts. Israel retains control of security and land-management in Area C and views the area as there to serve its own needs, such as military training, economic interests and settlement development. Ignoring Palestinian needs, Israel practically bans Palestinian construction and development. At the same time, it encourages the development of Israeli settlements through a parallel planning mechanism, and the Civil Administration turns a blind eye to settlers’ building violations.”