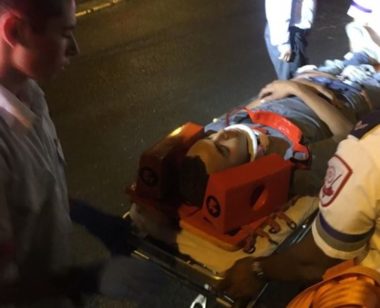 Israeli soldiers invaded, on Tuesday evening, the town of al-‘Isawiya, east of occupied Jerusalem, and injured several Palestinians, including a woman who was wounded in her eye, in addition to causing property damage.

Media sources said the soldiers invaded many neighborhoods in al-‘Isawiya, and fired rubber-coated steel bullets, gas bombs and concussion grenades at local protesters, and at many Palestinian cars and homes.

The sources added that one woman was injured in one if her eyes after the soldiers fired rubber-coated steel bullets at her car while driving.

The soldiers also surrounded a mosque in the town, and attacked dozens of Palestinians, in addition to firing gas bombs and rubber-coated steel bullets at them, causing many injuries.

One of the wounded Palestinians is an elderly man, who was attacked and pushed by the soldiers before they threw him onto the ground.

In addition, the soldiers surrounded the home of Mohammad Obeid, 21, who was killed by Israeli army fire on June 27th, and prevented the Palestinians from entering or leaving it, in addition to occupying rooftops of several surrounding homes.

The soldiers forced the residents to remove Palestinian flags, and posters of the slain Palestinian, in addition to detaining several young men.

The latest attacks took place less than twelve hours after the soldiers invaded the town and conducted extensive and violet searchers of homes and other property, including cars and stores.