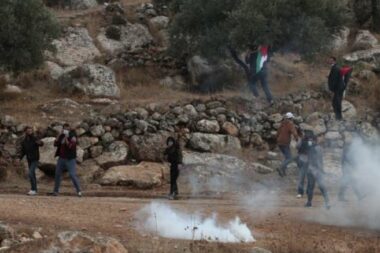 Israeli soldiers injured, Friday, many Palestinians participating in a nonviolent activity to plant olive saplings on their lands which Israeli intends to illegal annex, in Beit Dajan village, east of the northern West Bank city of Nablus. The soldiers also abducted two children in the al-Lubban ash-Sharqiya village, south of Nablus.

Nasr Abu Jaish, the head of Beit Dajan Village council, said the Palestinians were planting olive sapling in about 300 Dunams (74.13 Acres) of their lands which Israel want to annex for its illegal colonialist activities.

Abu Jaish added that the soldiers fired a barrage of rubber-coated steel bullets, gas bombs and concussion grenades at the Palestinians, wounding two and causing more than 15 to suffer the effects of teargas inhalation.

The Palestinians hold weekly nonviolent procession to protest the escalating Israeli violations, including the theft of their lands, and are constantly met with the excessive use of force by the soldiers.