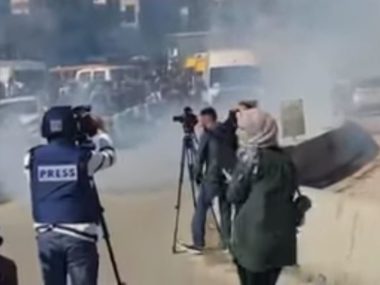 Israeli soldiers resorted to the excessive use of force, Saturday, against dozens of Palestinian and international journalists during a nonviolent procession near Qalqilia Terminal, north of occupied East Jerusalem.

The procession was held by Palestinian, Arab and international journalists, who were standing at least 150 meters away from Qalandia terminal.

The soldiers started firing many gas bombs at them, causing dozens to suffer the effects of teargas inhalation.