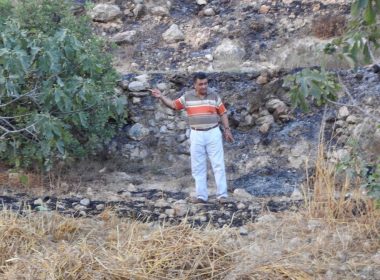 Medical sources have reported, Friday, that dozens of Palestinians suffered the effects of teargas inhalation, one was shot with a rubber-coated steel bullet, and many others sustained cuts and bruises, after Israeli soldiers attacked them while defending their village, Orif, south of the northern West Bank city of Nablus, when a group of extremist illegal Israeli colonists attacked its farmlands, burnt and cuts dozens of trees.

Adel Omar, an activist with the Israeli Information Center for Human Rights in the Occupied Territories (B’Tselem), said the attack was carried out by dozens of assailants from Yitzhar illegal Israeli colony, which was built on private Palestinian lands.

He added that the colonists invaded the eastern area of the village and burnt dozens of Dunams planted with olive and almond trees, in addition cutting many trees.

The soldiers then invaded the village, and attacked the Palestinians, before firing many live rounds at them, gas bombs and rubber-coated steel bullets.

One Palestinian was shot with a rubber-coated steel bullet in his head, before he was rushed to Rafidia hospital for treatment.

Dozens suffered the effects of teargas inhalation and received the needed treatment by local medics.

The soldiers also fired live rounds at a press vehicle for Palestine TV.

In a statement, the Committee for Protecting Orif village said the Israeli assailants caused the following damage to the Palestinian lands.