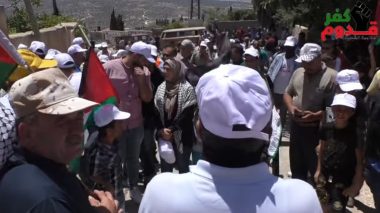 The protesters marched from the center of the town heading towards their land, isolated behind the annexation Wall, while chanting against the ongoing Israeli occupation, its violations against the Palestinian people, and its illegal colonialist activities.

The soldiers fired many rubber-coated steel bullets, gas bombs and concussion grenades at the protesters, while several youngsters started hurled stones at them. Furthermore, the soldiers hid behind Palestinian olive trees to ambush the protesters, and chased many young men, but were unable to abduct any of them.

Medical sources in the town said several Palestinians suffered the effects of teargas inhalation and received the needed treatment.
Kufur Qaddoum holds ongoing weekly processions against the illegal Annexation Wall and Colonies, and demanding the army to reopen the town’s main road, which was blockaded fifteen years ago, to enable easy access for colonialist settlers driving to and from Kedumim illegal colony, which was built on private Palestinian lands.