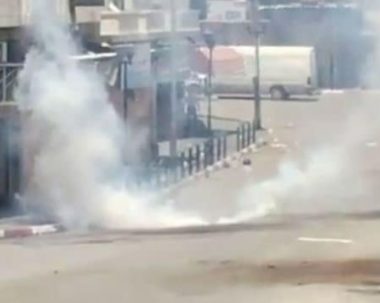 Israeli soldiers shot, on Monday evening, a young man with a live round in his back, and injured several Palestinians who suffered burns and the effects of teargas inhalation, during a protest near Qalandia refugee camp, north of occupied East Jerusalem.

The Palestinian Red Crescent Society said one Palestinian was shot with a live round in his back, and was rushed to a local hospital, suffering a moderate injury.

It added that three other Palestinians suffered cuts and burns due to the Israeli gas bombs and concussion grenades, and many others suffered the effects of teargas inhalation.

It is worth mentioning that hundreds of Palestinians marched from the entrance of Qalandia refugee camp, heading towards Qalandia Terminal, while chanting against the so-called Israeli Nationality Law, and the Israeli decision to remove and displace the families of al-Khan al-Ahmar Palestinian Bedouin community, near Jerusalem.

They also demanded Israel to release the corpse of Mohammad Yousef Oleyyan who was killed by the army in occupied Jerusalem on September 18th.

The protesters chanted against the ongoing illegal Israeli occupation and colonialist activities, and demanded the International Community to act and help in implementing International Law, and stopping the constant and escalating Israeli violations against the Palestinian people and their legitimate rights.