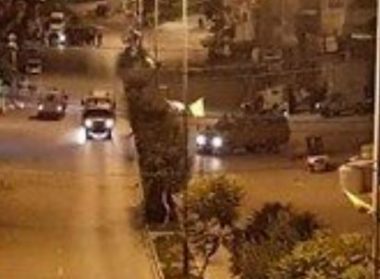 Israeli soldiers injured, on Monday evening, several Palestinians during protests that took place after the soldiers invaded Ramallah, Tubas, and Hebron, in the occupied West Bank.

Several army jeeps invaded the Um ash-Sharayet neighborhood in the al-Biereh city, near Ramallah in central West Bank, and attacked protesters with live fire and gas bombs, causing many to suffer the effects of teargas inhalation.

The soldiers also invaded and ransacked the Health Work Committees building in the Sateh Marhaba neighborhood, after smashing its main door, and confiscated laptops and files.

In Tubas, in northeastern West Bank, the soldiers shot a young man with a live round in the thigh during protests that erupted after the army invaded it.

Medical sources said the young man suffered moderate wounds before he was moved to a local hospital.

In Hebron, in southern West Bank, the soldiers attacked a nonviolent activity held by the Palestinians after the army bulldozed their lands east of Yatta town, south of the city, before shooting a young man with a gas bomb in the leg, in addition to causing scores of Palestinians to suffer the effects of teargas inhalation.

The soldiers also invaded Kharsa village, southwest of Hebron, before storming and searching many homes.

The soldiers also installed roadblocks in the area, before stopping and searching dozens of cars, and interrogated the Palestinians while inspecting their ID cards.