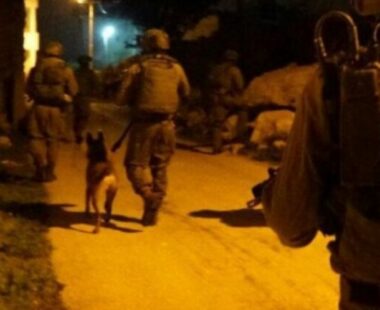 The PPS office in Jenin, in northern West Bank, said the soldiers abducted Mohammad Monir Tahaina, from his home in Sielet al-Harithiya, northwest of Jenin, and Saleh Sabari Shamali, from his home in Arraba town, southwest of the city.

Furthermore, the Israeli police detained Daoud Husam Tahaina and Mohammad Omar al-Omari, from their work in occupied Jerusalem; both from Sielet al-Harithiya town.

Furthermore, the soldiers invaded and searched homes before abducting Husam Far’un and Nizar Bassa, from their homes in the al-‘Ezariya town, in addition to Khamis Bahar from his home in Abu Dis town, southeast of Jerusalem.

In Hebron, in southern West Bank, the soldiers abducted Hani Shaker Fakhouri and Odai Hmeidan Sharabati, 26, from their homes.