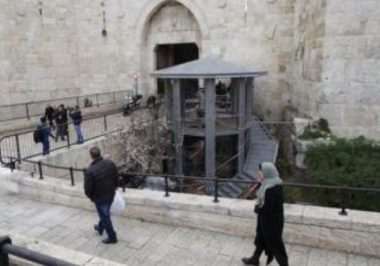 The new monitoring tower, in Bab al-‘Amoud (Damascus Gate) area, overlooks several locations, including the parking lot where Palestinians park their cars outside the walls of the Old City.

On Monday, the soldiers installed a monitoring post, on the rooftop of Bab ar-Rahma Hall, in the Al-Aqsa Mosque compound.

There are currently four military monitoring posts and towers in the Old City, in addition to various iron barricades, violating Freedom of Movement principles, and placing further difficulties and obstacles on the Palestinians, entering or leaving the Old City, including the Al-Aqsa Mosque.