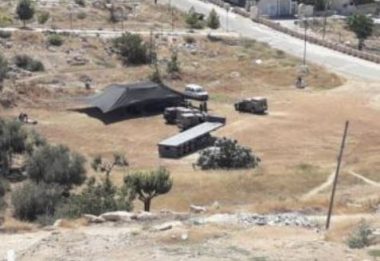 Israeli soldiers invaded, Monday, Wad al-Hasseen area, east of Hebron city, in the southern part of the West Bank, and installed a military tent on a private Palestinian near the site where, a week ago, the army installed mobile homes.

Several army jeeps surrounded the land, nearly 4 Dunams owned by members of Jaber family, before the soldiers installed the tent, near the illegal Keryat Arba’ colony.

A week ago, the soldiers placed several mobile homes near the new military base, which was illegally installed on Jaber family lands last month.

The Palestinians fear that the tent and mobile homes are preparation work for establishing a new colonialist outpost, especially since it is near Keryat Arba’, and on a pathway used by illegal colonialist settlers to reach the historic Ibrahimi mosque.

They also fear that the new outpost would eventually be permanently confiscated, and linked to Keryat Arba’.

In addition, the soldiers handed a demolition order targeting a home, in addition to delivering another order for the removal of mobile homes, used as a make-shift school in Masafer Yatta area, south Hebron.

Also Monday, the soldiers invaded Barta’a ash-Sharqiya town, west of the northern West Bank city of Jenin, and summoned the owners of twelve Palestinian homes and five stores, for interrogation in Beit El, near Ramallah in central West Bank, allegedly for building without permits.