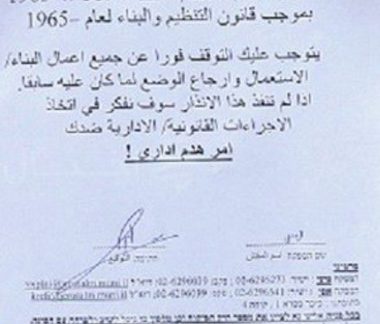 Israeli soldiers invaded, Monday, Masafer Yatta area, south of the southern West Bank city of Hebron, and handed a demolition order of one home, in addition to delivering another order for the removal of mobile homes, which are used as a make-shift school.

Rateb Jabour, the media coordinator of the National and Popular Committees, said the soldiers handed Mohammad Ali Dababsa an order for demolishing his home.

He added that the home, built with light bricks and tin, is on his land in Khallet ad-Dabe’ area, in Masafer Yatta.

In addition, the soldiers, personnel of the Israeli “Construction and Planning Committee” in the occupied West Bank, and members of Rigafim extreme right-wing colonialist organization, handed orders for the removal of mobile homes, which were installed a few days ago, to serve as a local school for children in Khallet ad-Dabe’.

Also Monday, the soldiers invaded Barta’a ash-Sharqiya town, west of the northern West Bank city of Jenin, and summoned the owners of twelve Palestinian homes and five stores, for interrogation in Beit El, near Ramallah in central West Bank, allegedly for building without permits.