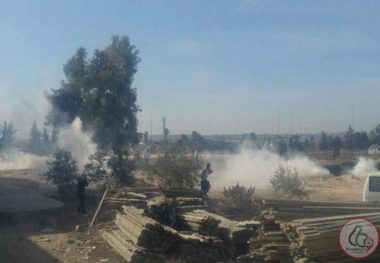 Dozens of Israeli soldiers invaded, on Friday evening, the Campus of Kadoorie Technical University, west of Tulkarem, in the northern part of the occupied West Bank, after surrounding it.

The Public Relations Department in Kadoorie told the WAFA Palestinian News Agency that the soldiers surrounded the campus, and invaded it from the western area, near the Annexation Wall.

It added that the soldiers provocatively roamed in the campus, and some of its facilities, before withdrawing.

It also called on the international community to intervene and stop the serious Israeli violations, especially since the army has repeatedly invaded the university over the last several years, and conducted very violent searches, causing property damage, in addition to the dozens of injuries among students, faculty members and other Palestinians, due to Israeli live fire, gas bombs, concussion grenades and rubber-coated steel bullets.