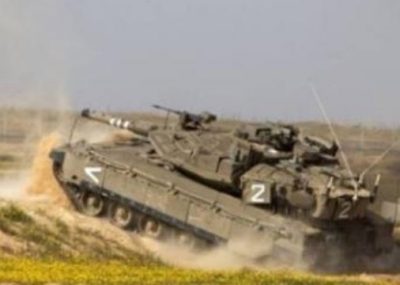 Several Israeli military vehicles invaded, on Monday morning, Palestinian farmlands in the eastern part of Khan Younis, in the southern part of the Gaza Strip, and bulldozed them, while firing live rounds and using smoke screens.

The WAFA Palestinian News Agency has reported that at least three armored bulldozers and six tanks advanced more than 100 meters into the Palestinians lands, and bulldozed sections close to the border fence, in addition to installing sand hills.

It added that the soldiers fired many live rounds, and used smoke screens to conceal their vehicles while bulldozing the lands.

The Israeli army carries out repeated invasions into Palestinian lands, close to the border fence, in the northern and eastern parts of the besieged Gaza Strip, and prevent the farmers from entering their lands.

Such attacks are frequently accompanied by assaults targeting Palestinian fishers and their boats, in Gaza territorial water, leading to casualties, abductions and property damage.

On Monday, May 15th 2017, the navy opened fire on Palestinian fishing boats, killing one fisherman, identified as Mohammad Majed Bakr, 25.