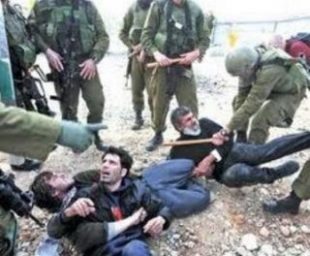 Israeli soldiers invaded, on Monday at dawn, several Palestinian cities and towns in different parts of the occupied West Bank, stormed and ransacked many homes, and kidnapped at least two Palestinians.

The soldiers also invaded the northern West Bank city of Nablus, and kidnaped two Palestinians, in addition to a third Palestinian who was kidnapped in Deir al-Hatab village, east of the Nablus city, after searching their homes.

In addition, the soldiers invaded the al-‘Asakra village, east of Bethlehem, and violently searched homes belonging to Ahmad Adel Asakra, Karim Asakra, Nasri Asakra and Nasser Asakra, before interrogating them and their families.

The soldiers also invaded Deir al-‘Asal village, west of Doura, south of the southern West Bank city of Hebron, searched many homes and installed roadblocks. Owner of one of the invaded homes have been identified as Ibrahim Shawamra.

Furthermore, the soldiers invaded several neighborhoods in Hebron city, and installed a roadblock on its northern entrance, in Jouret Bahlas area, in addition to the main roads leading to Beit ‘Awwa and Sa’ir towns, before stopping and searching dozens of cars, and questioned many Palestinians while examining their ID cards.