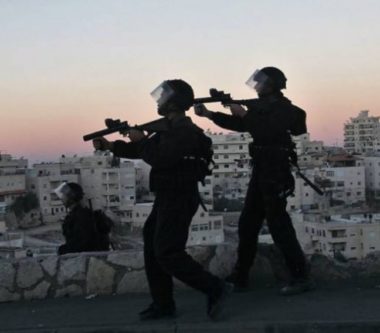 The soldiers invaded al-Quds Street before storming and ransacking many homes, and residential buildings, and interrogated dozens of Palestinians while inspecting their ID cards.

The soldiers also invaded homes near the al-Am’ari refugee camp, and al-Quds Street in al-Biereh city, in addition to Kobar town, north of Ramallah.

Many Palestinian youngsters protested the invasions, and hurled stones at the army vehicles, while the soldiers fired gas bombs, concussion grenades, and rubber-coated steel bullets.

Ezzat Badwan, the Mayor of Kobar, said several army vehicles invaded the town, and were mainly stationed at its main road, and added that the soldiers stopped and searched dozens of cars while the residents were trying to leave for work or school.

He added that the soldiers also invaded a land, owned by Abdul-Karim Barghouthi, and started bulldozing it without any cause or justification.

In addition, the Israeli army said its soldiers safely detonated two explosive devices in an open area in Kobar.

The soldiers also fired many rubber-coated steel bullets and gas bombs at protesters near Birzeit University, and Abu Shkeidim village.