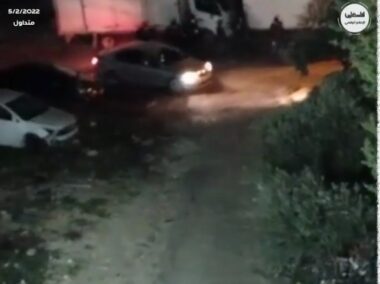 On Saturday at night, Israeli soldiers invaded the town of Sur Baher, southeast of the occupied Palestinian capital, Jerusalem, in the West Bank, the official Palestine TV has reported.

Eyewitnesses said dozens of soldiers invaded the town before deploying in several neighborhoods and alleys.

They added that the soldiers prevented the Palestinians from leaving their community or returning to it. However, there have been no reports of protests, injuries, or abductions.

In related news, dozens of illegal Israeli colonizers, accompanied by Israeli police and soldiers, gathered in Ras al-Amoud neighborhood in Silwan town, in Jerusalem, and blocked all Palestinian traffic, the Wadi Hilweh Information Center In Silwan (Silwanic) has reported.

On Friday at night, Palestinian residents thwarted an attempt by an illegal Israeli colonizer to burn a Palestinian-owned vehicle in the threatened Sheikh Jarrah neighborhood of occupied East Jerusalem, witnesses reported. The Israeli police later arrested the assailant, the Wadi Hilweh Information Center In Silwan (Silwanic) has confirmed.