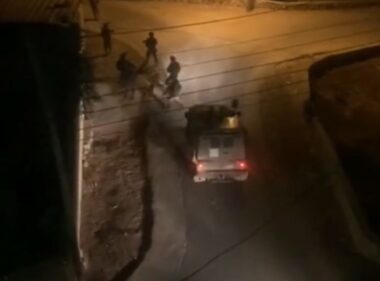 Hundreds of Israeli soldiers invaded, on Tuesday evening, dozens of areas across the Jenin governorate, in the northern part of the occupied West Bank, and conducted extensive searches.

Media sources in Jenin said dozens of soldiers invaded the Arraba Medow area, south of Jenin, and conducted searches in Palestinian lands and communities, in addition to surrounding all nearby villages and towns, close to the illegal Annexation Wall.

They added that the soldiers invaded Arabbuna village, northeast of Jenin, before storming and ransacking dozens of homes.

Similar invasions and searches were also carried out, for the second consecutive day, in Faqqu’a village, northeast of Jenin.

The soldiers also invaded and searched mountains near Faqqu’a, in addition to stopping and interrogating dozens of residents while inspecting their ID cards.

The Israeli army claims its extensive searches are part of the efforts to locate the six Palestinian political prisoners who managed to escape from the heavily fortified Israeli Gilboa’ prison.