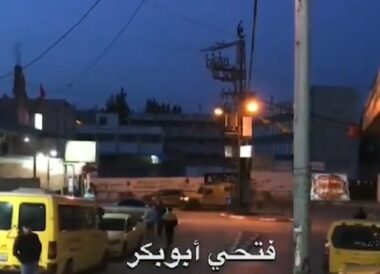 Several Israeli army jeeps invaded, on Saturday at dawn, the town of Ya’bad, southwest of the northern West Bank city of Jenin, before the soldiers stormed and ransacked several homes, leading to protests.

Local sources said the soldiers conducted violent searches of a few homes and interrogated the families.

Two owners of the invaded homes have been identified as Abdullah Salim Abu Shamla and Taher Jawad Badarna.

The invasion led to protests in the town before the soldiers fired many rubber-coated steel bullets and concussion grenades.

On Saturday at dawn, Israeli soldiers abducted four Palestinians from Qalqilia and Hebron in the northern and southern parts of the occupied West Bank.