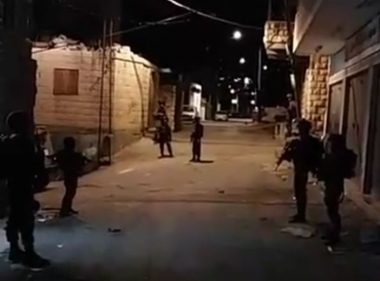 Israeli soldiers surrounded and isolated, on Thursday evening, the town of Hizma, east of occupied Easy Jerusalem, and prevented the Palestinians from entering or leaving it, and fired dozens of gas bombs at local youngsters, who hurled stones at the army jeeps after invading their town.

They added that the soldiers forced all stores and shops to close, after invading and searching them.

The army said it invaded the town after several youngsters hurled stones at an Israeli settlement’s bus, driving near the town.

The Israeli army constantly carries out collective punishment measures against entire cities, towns and refugee camps, in addition to the daily invasions and violent searches of homes, and property, and the constant abduction of Palestinians.