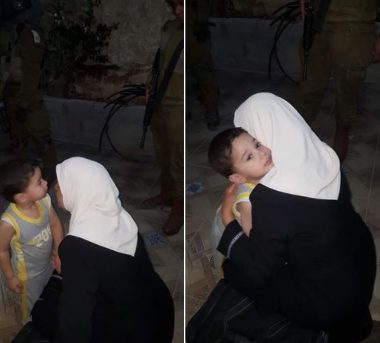 The Palestinian Prisoners’ Society (PPS) has reported that Israeli soldiers abducted, on Tuesday at dawn, a woman from Hebron, and two young men from Bethlehem, in the occupied West Bank.

The Hebron office of the PPS, in the southern part of the West Bank, said the soldiers searched homes throughout the city, and abducted Palestinian woman, a writer and a mother, identified as Lama Khater.

Activists managed to take a picture of the woman holding her child, and kissing him farewell, before the soldiers took her to an unknown destination.

In addition, the soldiers invaded and searched homes in Hindaza area, east of Bethlehem in the West Bank, before abducting Mahmoud Ibrahim Jawareesh, 42, and Mohammad Nasser Awwad, 22.

The Israeli army claimed its soldiers located weapons during searched in Ramallah and al-Biereh governorate.

It is worth mentioning that the soldiers invaded many homes across the West Bank, and interrogated several Palestinians while inspecting their ID cards, in addition to installing roadblocks.