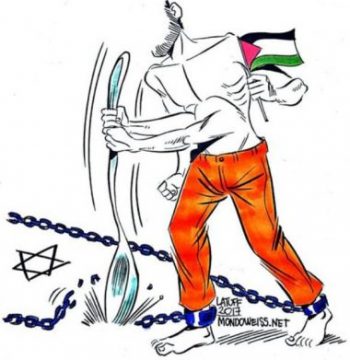 The “Detainees’ Media Office” has reported, Monday, that six Palestinian detainees, held by Israel under arbitrary Administrative Detention orders without charges or trial, are ongoing with hunger strike, rejecting their illegal detention.

The detainees are demanding the Prison Authority to stop holding them under such orders, by either releasing them, or file charges against them, instead of repeatedly renewing the detention orders against them.

It said that Hasan Shouka, from Bethlehem, started his strike 51 days earlier, protesting being held without charges since October 01, 2017, especially since the prison authority has renewed the Administrative Detention orders against them three consecutive times, an issue that forced him to declare an open-ended hunger strike.

The detainee was repeatedly abducted and imprisoned by Israel, and spent nearly 13 years in prison as a result of these arrests.

It is worth mentioning that Shadeed previously went on hunger strike for more than 90 days, before Israel agreed not to renew his detention orders, but he was abducted, once again, after his release, and was received the same orders.