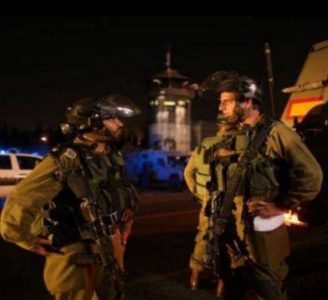 Israeli soldiers invaded, on Sunday at dawn, several districts in the occupied West Bank, broke into and searched many homes, and kidnapped at least eight Palestinians, five of them from the southern West Bank district of Hebron.

The soldiers also invaded Bani Neim town, east of Hebron, searched a few homes and kidnapped Lara Nasser Tarayra, 22, the sister of Mohammad Tarayra, 17, who was killed after he stabbed and killed a 13-year-old Israeli child in Keryat Arba’ colony, earlier on Thursday, before he was shot dead.

In addition, the soldiers kidnapped an elderly Palestinian man, identified as retired Lieutenant Khaled Mohammad al-Madhoun, 61, after invading and searching his home in Tal Romeida neighborhood, in Hebron.

Furthermore, a Palestinian worker, identified as Ehab Husam ‘Alawna, from Jaba’ town, south of the northern West Bank city of Jenin, was kidnapped at dawn while working in Jerusalem.

On Saturday at night, several Palestinians were injured after a number of extremist Israeli settlers, living in illegal colonies in the northern West Bank district of Nablus, attacked Palestinian cars and hurled stones on them, in areas in the southern and western parts of Nablus.

Also on Saturday at night, the soldiers detained four Palestinian children at a military roadblock the army installed on the main entrance of their village, Zabbouba, west of the West Bank city of Jenin.

On Saturday evening, the soldiers invaded Doura town, south of Hebron, and clashed with several local youths, before wounding two with live rounds, and many others with rubber-coated steel bullets, while many Palestinians suffered the effects of teargas inhalation.