Israeli Soldiers Kidnap Ten Palestinians, Including A Journalist, In Jerusalem 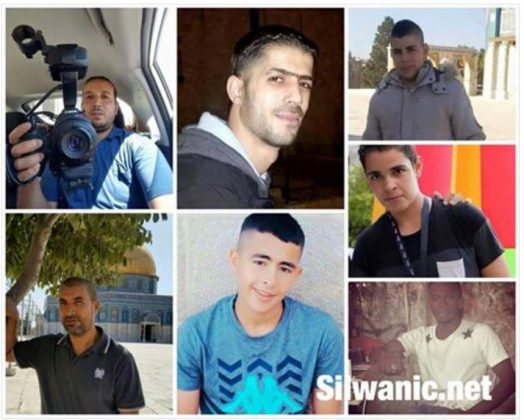 Israeli soldiers have kidnapped, overnight and at dawn Sunday, at least ten Palestinians, during massive invasions and searches of homes; nine of the kidnapped are from the Old City, and one from Silwan town.

The Israeli Radio said quoted army sources claiming that nine of the kidnapped are suspected of involvement in hurling stones on Israeli police and army vehicles around the Al-Aqsa Mosque, in addition to Silwan town and Bab Al-‘Amoud.

WAFA added that ‘Arafa was first ordered to head to a security center for interrogation, on Saturday evening, and was released a few hours later, yet, the army invaded his home and kidnapped him.

On Sunday at dawn, the soldiers invaded several districts in the occupied West Bank, broke into and searched many homes, and kidnapped at least eight Palestinians, five of them from the southern West Bank district of Hebron.

On Saturday at night, several Palestinians were injured after a number of extremist Israeli settlers, living in illegal colonies in the northern West Bank district of Nablus, attacked Palestinian cars and hurled stones at them, in areas in the southern and western parts of Nablus.

Also on Saturday at night, the soldiers detained four Palestinian children at a military roadblock that the soldiers installed on the main entrance of their village, Zabbouba, west of the West Bank city of Jenin.

On Saturday evening, the soldiers invaded Doura town, south of Hebron, and clashed with several local youths, before wounding two with live rounds, and many others with rubber-coated steel bullets, while many Palestinians suffered the effects of teargas inhalation.