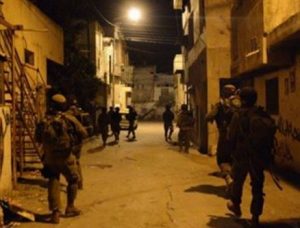 Israeli soldiers kidnapped, on Wednesday dawn, nine Palestinians in the central West Bank district of Salfit, and two others in Hebron and Ramallah. Five Palestinians were also kidnapped earlier in Bethlehem and Nablus.

Another Palestinian, identified as Mohammad al-‘Adasy, was kidnapped from his home in Silwad town, northeast of Ramallah.

Also on Wednesday at dawn, the soldiers kidnapped five Palestinians; three, including two children, in the West Bank district of Bethlehem, and two university students in Nablus.

In addition, the soldiers invaded the towns of Harmala, Janata and Teqoua’, near Bethlehem, and searched many homes.