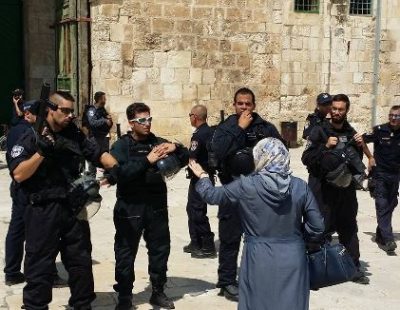 Israeli soldiers have kidnapped, on Tuesday morning, five Palestinians, including a guard of the Al-Aqsa Mosque, in occupied Jerusalem. The District Court in Jerusalem ordered the release of several previously detained Palestinians, and ordered several others under further interrogation.

The Wadi Hilweh Information Center in Silwan (Silwanic) has reported that the soldiers kidnapped a guard of the Al-Aqsa Mosque, identified as Mohannad az-Zaghal, while working near the Chain Gate, and took him to a nearby police center.

Silwanic added that the soldiers also invaded and searched several homes in Bab Hatta area, in the Old City, and kidnapped five Palestinians.

Silwanic stated that the Israeli court recently ordered a child, identified as Mohammad Jabr Abbassi, under house arrest for seven days and imposed a 650 Shekels fine.