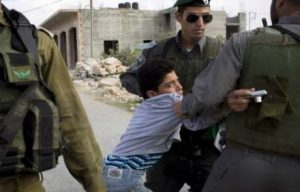 Israeli soldiers invaded, on Wednesday evening and earlier on Thursday, the West Bank districts of Bethlehem and Hebron, and kidnapped seven Palestinians, including a woman, and two children playing with toy guns.

Clashes also took place in the camp after the soldiers invaded it; the army fired many gas bombs and concussion grenades, while local youngsters hurled stones at the military vehicles.

Furthermore, the Hebron office of the PPS said the soldiers kidnapped a mother of three children, identified as Hanadi Mahmoud Rasheed, 22, from Yatta town, south of Hebron.

The woman was kidnapped near the Ibrahimi Mosque, in Hebron city, after the soldiers claimed “she carried a sharp object in her purse.

On Wednesday evening, the soldiers kidnapped a Palestinian, identified as Yousef Safi Hamdan, from Kharsa village, south of Hebron, after the army invaded the village, and searched many homes.

Another Palestinian, identified as Mohammad Yazeed Jaber, 20, was also kidnapped in Hebron city. The soldiers handcuffed and blindfolded the three Palestinians, and took them to a police station in Keryat Arba’.