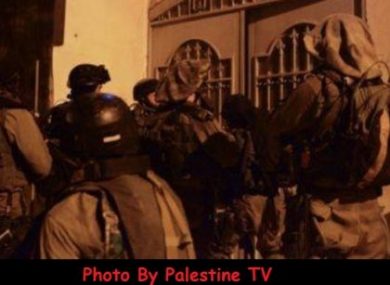 Israeli soldiers kidnapped, on Wednesday at dawn, six Palestinians in the southern West Bank district of Hebron, and four others in Tubas, in the northeastern part of the West Bank.

Furthermore, the soldiers invaded and searched several homes in Tubas, and kidnapped Hamza Daraghma, his brother Mo’men, in addition to Ahmad Mousa Daraghma.

In addition, the soldiers invaded Tammoun town, south of Tubas, and kidnapped Mustafa Abu Reehan, after searching his home.

Also on Wednesday at dawn, dozens of soldiers invaded the Suwwana neighborhood, and the at-Tour town, in occupied East Jerusalem, stormed and ransacked dozens of homes and kidnapped 45 Palestinians, including several children. The army released most of them later on.