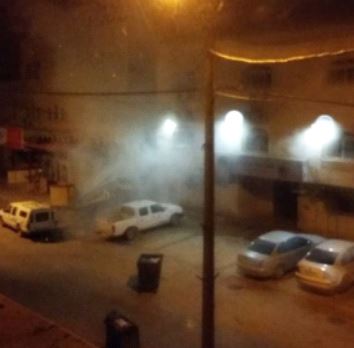 Mustafa Kamil, the head of the Jenin office of the Palestinian Red Crescent Society, said many Palestinians suffered the effects of teargas inhalation, including many who were injured in their homes, after the soldiers fired gas bombs at youngsters who hurled stones and empty bottles on the invading army vehicles.

Kamil added that resident Abdul-Hakim Nassar Zakarna, and his family, including children, suffered the severe effects of teargas inhalation, after one of the gas bombs directly struck their home.

He said the medics rushed to the family home, provided them with the urgently needed medical care, and moved them to a local medical center for further treatment.

In addition, the soldiers kidnapped three Palestinians in Bethlehem, Jenin and Hebron, in the occupied West Bank.

Also at dawn, dozens of army vehicles invaded various areas in Hebron city, and surrounding communities, in the southern part of the occupied West Bank, before storming and searching homes.

On Friday morning, the soldiers opened fire on Palestinian farmers in their own lands, east of Khan Younis, in the southern part of the Gaza Strip, while navy ships opened fire on fishers in northern Gaza.