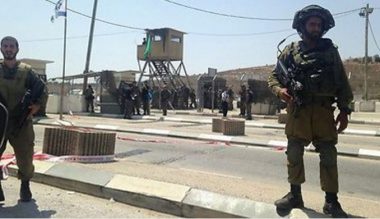 The Hebron office of the PPS has reported that the soldiers invaded Hebron city, in the southern part of the West Bank, and various nearby communities, searched many homes and kidnapped three Palestinians.

Furthermore, the soldiers kidnapped one Palestinian, after stopping him at the Za’tara military roadblock, south of Nablus, and took him to an unknown destination. His name remained unidentified until the time of this report.

The soldiers also stopped and searched dozens of cars, and interrogated many Palestinians while inspecting their ID cards.

In addition, the Tulkarem office of the PPS, in the northern part of the West Bank, said the soldiers also invaded and searched homes, and kidnapped two Palestinians, identified as Ahmad Ibrahim Khouli and Amir Khaled Khouli.

In occupied Jerusalem, the soldiers kidnapped a lawyer, identified as Mohammad Elian, in addition to Sa’ad Nasser, from al-‘Isawiyya town.

It worth mentioning that Mohammad is the father of Baha’, 22, who was shot dead by the Israeli army on October 13, 2015. The soldiers confiscated computers and mobile phones owned by Baha’ and his family.

In Bethlehem, the soldiers kidnapped two Palestinians identified as Shadi Nayef al-‘Amour, 21, and Moath Ibrahim al-‘Amour, 21, from Teqoua’ town, south of the city.