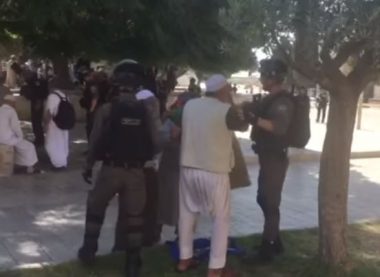 Dozens of Israeli soldiers, and undercover officers, stormed on Monday morning that courtyards of the Al-Aqsa Mosque through the al-Magharba Gate, attacked many Palestinian worshipers before closing the Al-Qibli Mosque, in preparation to allow dozens of Israeli extremists to tour the holy site. The soldiers and undercover officers forced all the Palestinian worshipers out of the mosque and its courtyards, in addition to assaulting and wounding many of them. The invasion was carried out through the al-Magharba Gate.

The army closed the al-Qibli mosque with chains, and removed the worshipers from it and its courtyards. The soldiers also fired gas bombs, causing several Palestinians to suffer the effects of tear gas inhalation, while a number of Palestinians hurled stones on the invading soldiers.

The Maan News Agency quoted Sheikh Azzam Khatib, the head of the Jerusalem Waqf and Endowments Department, stating that the invasions were carried out under direct orders from Israeli Prime Minister Benjamin Netanyahu, who reauthorized such provocative tours.

Khatib said the Israeli police affirmed at midnight that the al-Magharba Gate, similar to previous years, will not be open for settlers or foreign tourists during the last ten days of the holy Muslim month of Ramadan, but Netanyahu allowed them. “The Al-Aqsa Mosque was calm, and all was fine until nine in the morning, when suddenly, the police opened the Magharba Gate to allow the settlers through,” Khatib stated, “The soldiers and police surrounded dozens of worshipers, and attacked many of them.”

On Sunday evening, the police attacked many Palestinian and international worshipers, detained two Palestinians, and decided to force them out of the Mosque courtyards for several weeks.

The police also decided to deport two British men back to their country, after detaining them in the mosque courtyard. They have been identified as Mohammad Froukh and Julfan Heidjan.