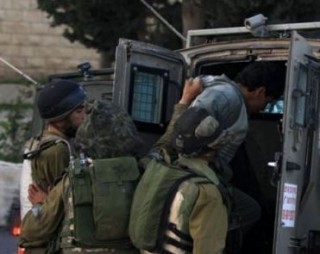 The Palestinian Prisoners’ Society (PPS) has reported that Israeli soldiers kidnapped, on Tuesday at dawn, at least twelve Palestinians, including four young women, in different parts of the occupied West Bank.

The PPS said the soldiers searched many homes in the central West Bank city of Ramallah, and kidnapped three young women identified as Nour al-Islam Darweesh, Hala al-Beetar and Salaam Abu Sharar. All are students of the Al-Quds University.

The PPS added that the soldiers kidnapped Morad Mohammad Taqatqa, 31, and Waleed Issa Taqatqa, 30, from their homes in Beit Fajjar town, south of Bethlehem.

In Hebron, in the southern part of the occupied West Bank, the soldiers kidnapped one Palestinian, identified as Mo’taz al-Mohtasib, while Abdul-Rahim Mahmoud Awad, was kidnapped from his home in Beit ‘Awwa town, south of the city.

The soldiers also summoned three former political prisoners for interrogation; they have been identified as Osama Obeid, Majed Jom’a, and his son.

In addition, the soldiers invaded the al-Lubban ash-Sharqiyya village, east of the northern West Bank city of Nablus, and occupied a Palestinian home, belonging to Ehsan Daraghma, before using it as a military post and a monitoring tower.

The soldiers installed a tent on the rooftop of the invaded home, and deployed dozens of soldiers around it, inside the property and on its rooftop.

Two other Palestinians, identified as Mahmoud Osha’ Mona and Ahmad Talal Mona, were kidnapped in the Sa’diyya neighborhood, in occupied Jerusalem.

Also on Monday evening, the soldiers kidnapped three Palestinian children in Shu’fat neighborhood, in Jerusalem, allegedly for throwing stones on the Light Rail.

On Monday evening, Israeli soldiers shot and injured a Palestinian child, in the al-Ram town, northeast of Jerusalem, and also kidnapped a young man from his home in the town.