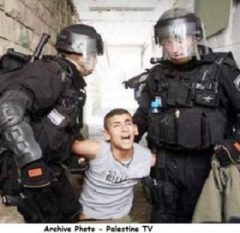 Israeli soldiers kidnapped, earlier on Tuesday, two Palestinians in the southern West Bank city of Hebron, while a number of fanatic Israeli colonizers stole furniture of two Palestinian homes that were closed under direct military orders.

The WAFA News Agency has reported that several army vehicles invaded the al-‘Arroub refugee camp, near Hebron, before breaking into and searching many homes, and kidnapped two Palestinians, identified as Bayan Khaled al-Badawi, 27, and ‘Ali Jaber at-Teety, 21.

The soldiers also summoned Mohammad Issa Jawabra, 20, for interrogation in the Etzion military and security base.

On Monday evening, a number of fanatic Israeli colonizers invaded an alley, linking between the Shuhada and Shallala streets, in Hebron city, breaking into two homes, that were forced shut under military orders.

The assailants destroyed furniture in the two homes, and stole furniture from them, before leaving the area.

The two homes are owned by two families, Sayyed Ahmad and Tahboob, and were closed under direct Israeli military orders, and the families are not allowed even to enter them briefly.