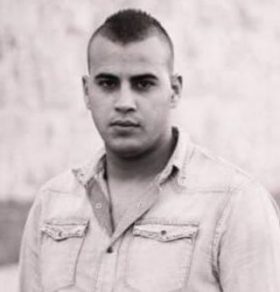 The Israeli army transferred, on Monday evening, the body of Fuad Abu Rajab, 21, who was killed in occupied Jerusalem, on March 8th. His body was moved to the Ofer Israeli military base, west of Ramallah, before being handed to a Palestinian ambulance.

The Palestinian ambulance then took him to the Palestine Medical Center, in Ramallah, where hundreds of Palestinians gathered.

Aby Rajab was killed on March 8th, after opening fire on Israeli police officers in the Old City of occupied Jerusalem, and Israel held his body since then. He is from al-Jadeera village, west of Ramallah. Police said two officers were injured.

It is worth mentioning that Israel also decided to force several members of Abu Rajab’s family, out of Jerusalem, for “staying illegally in the city,” and moved some of them to the Qalandia terminal, north of Jerusalem, before they crossed to the Palestinian side.

After his death, the army summoned Abu Rajab’s mother, his sisters Reem, 19, and Rose, 16, in addition to his brothers Mahmoud, 15, and Mohammad 14, and interrogated them in the Al-Maskobiyya police station, in West Jerusalem, before officially informing them they will be expelled to the West Bank.

Earlier on Monday, The Israeli army has transferred the bodies of Maram, 23, and her brother Ibrahim Taha, 16, back to the Palestinian side at the al-Jeeb military roadblock, west of Ramallah.

Maram and Ibrahim Taha were killed on April 27, after the soldiers shot them near the Qalandia terminal. Maram was five months pregnant, and a mother of two children; Sarah, 6, and Remas, 4.

Israel is now holding the bodies of eleven slain Palestinians, eight of them from Jerusalem, two from Hebron, and one from ‘Aida refugee camp, in Bethlehem.