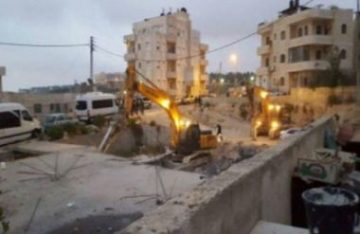 Israeli soldiers, and personnel of the Jerusalem City Council, invaded earlier on Tuesday the al-‘Isawiyya town, in the center of occupied Jerusalem, and demolished several strictures. The soldiers also invaded Silwan town, and demolished a storage room.

Raed Abu Ryala (al-‘Eesawy), member of the Follow-Up Committee in al-‘Isawiyya, said the soldiers demolished the foundations of a home, belonging to Mohammad Hussein Mustafa, in the ath-Thahra neighborhood, in addition to bulldozing a land, belonging to Amin Khallaf, and demolishing its surrounding walls, and some of its interior structures.

Abu Ryala added that a large army force invaded the town, after completely surrounding it, and declared it a closed military zone, leading to clashes with dozens of youths who hurled stones at the invading vehicles.

The soldiers also invaded Silwan town, south of the Al-Aqsa Mosque in Jerusalem, and demolished a storage room in Karm the ash-Sheikh neighborhood.

The soldiers also besieged the town, completely isolating it from its surrounding Palestinian communities.