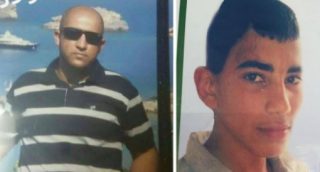 Dozens of Palestinians from occupied Jerusalem participated, after midnight, in the burial ceremonies of two Palestinians, including a child, who were killed by the Israeli army seven months ago, and Israel held their bodies since then.

The Wadi Hilweh Information Center in Silwan (Silwanic) in occupied Jerusalem, said the soldiers transferred the bodies of Hasan Manasra, 15, and Ala’ Abu Jamal, 32, who were killed by Israeli army fire on October of 2015.

Manasra was killed on October 12, 2015, in Pisgat Ze’ev settlement, built on Palestinian lands in Beit Hanina town, north of occupied Jerusalem, while Abu Jamal was killed in West Jerusalem.

The army started the transfer procedures of the two slain Palestinians at 11 before midnight, Monday, and completed the process at 3:30 at dawn.

The army transferred the bodies in two phases; first in the Bab al-Asbat graveyard, then in Jabal al-Mokabber graveyard, under very strict measures and extensive military deployment. 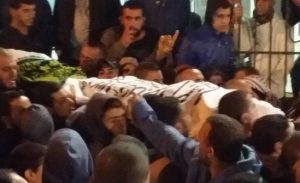 The Manasra family said the soldiers only allowed 40 persons to participate in the funeral, after searching them, including women and children, and took away all of their phones and cameras in order to prevent them from filming the burial ceremony.

Manasra’s body was kept in an Israeli morgue for 225 days, causing further suffering to his family that was unable to say farewell and burry him until Israeli finally allowed his burial. 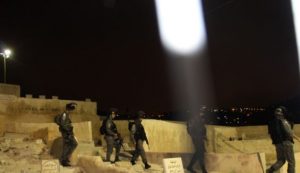 In Jabal al-Mokabber town, the soldiers also completely isolated it, and only allowed 40 Palestinians to participate in the burial ceremony of Ala’ Abu Jamal. The army initially refused to transfer his body after alleging that there are more than 40 Palestinians who were gathered near the cemetery.

Abu Jamal was killed 224 days ago, and Israel kept him in a morgue fridge since then, after refusing to transfer his body back to his family.

On Monday, the soldiers transferred the bodies of Maram, 23, and her brother Ibrahim Taha, 16, back to the Palestinian side at the al-Jeeb military roadblock, west of Ramallah. They were killed by army fire were killed on April 27, after the soldiers shot them near the Qalandia terminal.

On Monday evening, the army transferred the body of Fuad Abu Rajab, 21, who was killed in occupied Jerusalem, on March 8th. His body was moved to the Ofer Israeli military base, west of Ramallah, before being handed to a Palestinian ambulance.

It is worth mentioning that Israel is still holding the bodies of six slain Palestinians, identified as;