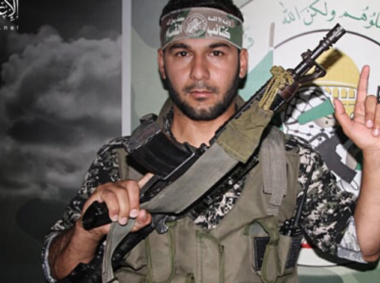 Israeli soldiers killed, Thursday, a young Palestinian man, east of Beit Hanoun, in the northern part of the Gaza Strip. The Palestinian was a member of Al-Qassam Brigades, the armed wing of Hamas, and was shot while trying to prevent protesters from approaching the perimeter fence.

The Palestinian Health Ministry has confirmed that the soldiers shot and seriously injured Mahmoud Ahmad al-Adham, 28, on Thursday morning, east of Beit Hanoun, and added that the young man succumbed to his injuries on Thursday evening.

It is worth mentioning that the soldiers also fired several live rounds at filed control post, east of Rafah, in southern Gaza Strip.

The Al-Qassam Brigades issued a statement accusing Israel of deliberately killing the Palestinian, and said that “it is evaluating the situation, and its response to the grave Israeli violation.”

His death comes after a period of relative calm along the perimeter fence, especially after the indirect “ceasefire understandings” between Hamas and Israel, to avoid tension along the fence.

He was one of the dozens of officers, and fighters, tasked with preventing any Palestinian from reaching the perimeter fence or attempting to cross it.

In a statement, the Israeli army admitted it shot and killed the fighter, after claiming that the incident was a “mistake stemming from a misunderstanding,” and added that “it will investigate it.”

As part of these understandings, Israel increased the fishing zone in the coastal region to fifteen nautical miles, a move that was described by Israeli officials as aiming at “preventing humanitarian deterioration,” in the already besieged and impoverished Gaza Strip.