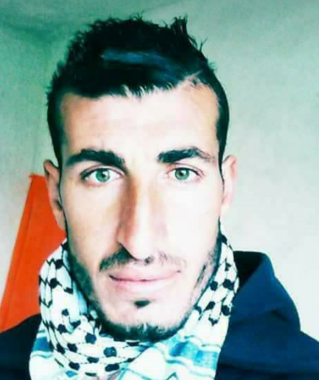 Israeli soldiers shot and killed, on Thursday at noon, a young Palestinian man, after he reportedly attempted to stab them, in Teqoua’ town, east of Bethlehem, in the occupied West Bank.

The Palestinian, identified as Mohmmad Hussein Tnouh, 26, was shot with four live rounds, before an army jeep ran over him, near al-Khansa’ school, in Teqoua’.

An Israeli army spokesperson said the soldiers “responded to an immediate threat, and killed the man.”

After shooting the Palestinian, the soldiers closed the area, prevented bystanders, and even medics, from approaching him, and later covered his body with a black sheet, before taking it away.

The Red Crescent said the soldiers refused to allow its medics to approach the Palestinian to assess his condition, and the extent of his injuries, before he was declared dead. It is worth mentioning that clashes took place after Tnouh was shot dead, and the soldiers fired dozens of live rounds and rubber-coated steel bullets.

Furthermore, the Palestinian Police said the soldiers shot one of its officers, identified as Zayed Sha’er, with a rubber-coated steel bullet in the head.

The death of Tnouh brings the number of Palestinians, killed by Israeli soldiers in occupied Palestine this year alone, to fifty Palestinians, including fifteen fourteen children, and a toddler, identified as Abdul-Rahman Mahmoud Barghouthi, only18 months of age, who died, on July 7th, from the severe effects of teargas inhalation after Israeli soldiers invaded Aboud village, northwest of Ramallah, in central West Bank, and fired many gas bombs.

Ten Israelis, including six soldiers and officers, were killed since the beginning of this year; two of them were Arab citizens of Israel.