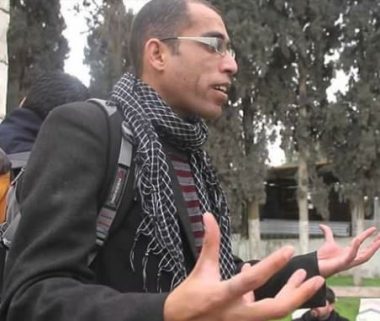 Dozens of Israeli soldiers invaded, on Monday at dawn, the al-Biereh town, near the central West Bank city of Ramallah, and killed a young Palestinian man, after exchanging fire with him for more than two hours; two Palestinians were injured by army fire.

The Palestinian has been identified as Bassel al-A’raj, 31, from the al-Walaja village, in the West Bank district of Bethlehem.

Eyewitnesses said the soldiers surrounded a house, where al-A’raj was hiding, in Qaddoura refugee camp, and exchanged fire with him for more than two hours, until he ran out of ammunition.

They added that the soldiers stormed the building and killed the Palestinian from a close range, then dragged his body from his feet for a distance, leaving a blood trail, and took his corpse to an unknown destination.

Clashes also took place between the invading soldiers, and dozens of local youths, who hurled stones and empty bottles on them, while the army fired many live rounds, rubber-coated steel bullets and gas bombs.

Medical sources in Ramallah said two Palestinians were shot by army fire, and were moved to a local hospital.

It is worth mentioning that al-A’raj has been wanted by the Israeli army for several months, and the soldiers frequently invaded his home, and his family’s homes, looking for him, amidst violent searches.

In March of 2016, al-A’raj and five other Palestinians, two identified as Haitham Sayyaj and Mohammad Harb, went missing for a week, and were later detained and interrogated by the Palestinian Security Forces, about their whereabouts.

The five were located in Noubani Farms area, near Ramallah, and declared open-ended hunger strikes in Palestinian prisons until they were released.

Shortly after their release, Israeli soldiers abducted four of them, but could not find al-A’raj, who remained “wanted” by the army until he was killed.

Bassel was a pharmacist who graduated from an Egyptian university, and worked in this profession near Jerusalem.

He was a historian and a writer who documented the ongoing Palestinian revolutions, starting in the 1930’s against the British occupation, and worked with various youth groups introducing them to the history of Palestine, including through trips to historic sites.

He also wrote several detailed articles in support of resistance against the Israeli occupation, and calling for completely boycotting Israel in Palestine, and around the world.