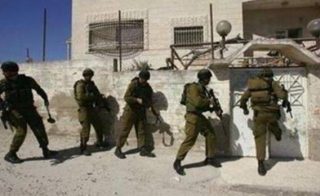 Israeli soldiers invaded, on Saturday evening, Harmala town, east of Bethlehem city in the occupied West Bank, and occupied a Palestinian home after kicking the family out.

Resident Mohammad Sbeih told the Maan News Agency said that soldiers invaded his two-story home, and confiscated its keys before kicking him and his nine family members, including several children, out.

He added that the soldiers told the family to “find another place to live, as long as Palestinian youths continue to hurl stones at the army vehicles.”

The invaded property is located at the edges of Harmala town, close to the Teqoua’ illegal Israeli colony, east of Bethlehem. The soldiers are still illegally occupying the building.