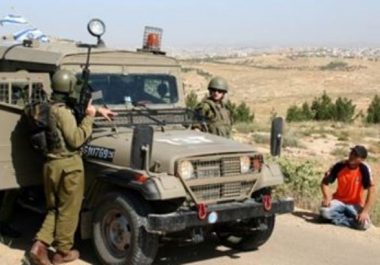 Israeli soldiers opened fire, Sunday, on Palestinian cars, transporting workers, causing two to flip over, and abducted the two drivers, near Yatta town, south of Hebron, in the southern part of the occupied West Bank.

Rateb Jabour, the coordinator of the National and Popular Committee in southern Hebron, said the soldiers chased Palestinian cars, transporting day laborers, in the at-Tabaqa area, close to the illegal Avigal colony, which was built on Palestinian lands, south of Yatta.

He added that the soldiers opened fire at several cars, causing two to flip over, and abducted the two drivers; one of them has been identified as Suleiman Abed Makhamra, 25.

Jabour also stated that dozens of soldiers have been deployed in many areas, including valleys and junctions, leading to Be’er as-Sabe’ (Beersheba), and various villages and towns in the southern Negev.

In addition, the Israeli soldiers invaded, the village of Deir Nitham, northwest of the central West Bank city of Ramallah, broke into and ransacked homes, and forced children out of their schools after invading them.

Earlier Sunday, the soldiers abducted at least fifteen Palestinians in the occupied West Bank, including ten in occupied East Jerusalem, during violent invasions and searched of homes.