Army Forces Children Out Of Their Schools, Break Into Homes, Near Ramallah 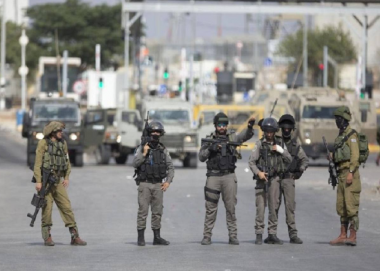 Israeli soldiers invaded, on Sunday morning, the village of Deir Nitham, northwest of the central West Bank city of Ramallah, broke into and ransacked homes, and forced children out of their schools after invading them.

Safi Tamimi, the coordinator of the Land Defense Committee in Deir Nitham, said that many armored military jeeps, and a bulldozer, invaded the village, at dawn, before closing its main entrance.

Tamimi added that the soldiers then broke into and ransacked many homes, and occupied the rooftops of the home of the village’s Imam, Fadel Abdul-Hamid, in addition to Asif Hussein Diab, and broke into the Local Council building.

On Sunday morning, the soldiers invaded many schools in the village, while the students were conducting their mid-term exams, and forced them out of their schools.

It is worth mentioning that the soldiers invaded many schools, Saturday, in the village, an issue that caused many to hurl stones at the soldiers, while the army fired gas bombs, causing dozens of students to suffer the effects of teargas inhalation.

It is worth mentioning that the soldiers broke into a school in the al-Khader town, south of Bethlehem, while the students were conducting the mid-term exams, and fired many gas bombs and concussion grenades.

The soldiers also fired gas bombs and concussion grenades at the students, while leaving their school.

Earlier Sunday, the soldiers abducted at least fifteen Palestinians in the occupied West Bank, including ten in occupied East Jerusalem, during violent invasions and searched of homes.