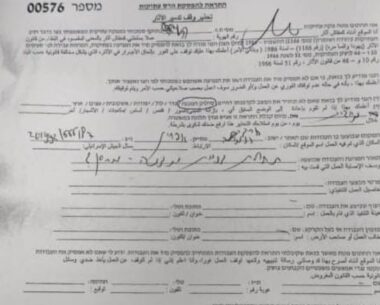 Israeli soldiers invaded, Wednesday, Palestinian lands in the az-Zawiya town, west of Salfit in central West Bank, and placed orders informing the owner he must stop working on his land and to halt the construction of an agricultural room.

The Palestinian, Salah Raddad, said his land is in the Khallet Rmeila area and added that the army claimed the lands are in an area designated as an “archaeological site.”

The lands are near the illegal annexation wall, and are located in both Area B and C of the occupied West Bank, under Israeli control.

Raddad stated that this is not the first time he receives these military orders, and added that the soldiers previously demolished a 32 square/meter agricultural room.

“I recently rehabilitated two Dunams of 25 I own in the area,” he said, “I paid a lot of money; however, apparently, the occupation wants me to stop so that Israel can confiscate and control my lands.”

The Mayor of Zawiya, Mahmoud Moqadi, said the army also handed Salah three orders, informing him that he needs to uproot recently planted trees, to stop the rehabilitation of the land and to halt the construction of a retaining wall.

“The area is frequently targeted by the army; two months ago, soldiers confiscated a bulldozer, owned by the town council, while rehabilitating a road in the area, in addition to installing an iron gate to restrict the movement of the villagers,” Moqadi stated, “The Palestinians also constantly receive orders to stop working on their lands. We will head to legal and human rights groups to see what options we have.”

In related news, the soldiers invaded Kisan Palestinian village, east of Bethlehem city, south of occupied Jerusalem in the West Bank, and ordered four Palestinians to stop the construction of their homes.