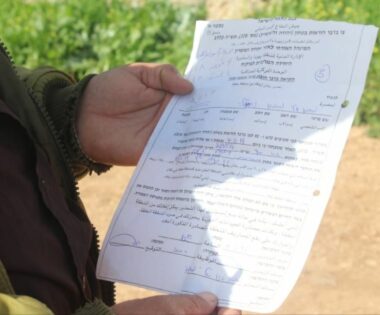 Israeli soldiers invaded, Wednesday, Kisan Palestinian village, east of Bethlehem city, south of occupied Jerusalem in the West Bank, and ordered four Palestinians to stop the construction of their homes.

Ghazal added that the army claims the homes, licensed by the local council, were not granted a permit by the “Civil Administration Office,” the administrative branch of Israel’s illegal occupation in the West Bank.

It is worth mentioning that the army recently ordered the Palestinians to stop the construction of a local school in the village.

Kisan is one of many Palestinian villages, subject to constant Israeli invasions, in addition to the demolition of homes and other property, and its lands are frequently targeted for the construction and expansion of illegal colonies and segregated roads.

Under the Oslo Accords, an agreement made 25 years ago that was supposed to last just five years towards a self-governing country alongside Israel, the Palestinian Authority was given limited control over a tiny pocket of land occupying 112 dunams, accounting for less than 1 percent of the village’s total area.