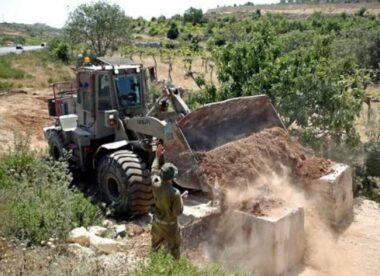 The coordinator of the Popular and National Committees in Hebron, Rateb Jabour, said the military bulldozers placed sand hills on Palestinian agricultural roads near Wadi al-A’war area, and the villages close to bypass road #60, mainly used by the army and colonialist settlers, in addition to Bani Neim town, northeast of Hebron city.

Jabour stated that the soldiers frequently close and blockade roads in the area to prevent the Palestinians from reaching their lands, especially in areas where Israel intends to build or expand its illegal colonies.

In related news, the soldiers chased a Palestinian car, and opened fire at it, east of Yatta town, south of Hebron, before abducting the driver, who remained unidentified at the time of this report.

On Wednesday evening, the soldiers abducted a young man at a military roadblock near Ya’bad town, southwest of the northern West Bank city of Jenin.

Many soldiers and colonialist settlers also invaded the archeological area in Sebastia Palestinian town, north of the northern West Bank city of Nablus.

On Wednesday at dawn, the soldiers abducted ten Palestinians from several parts of the West Bank and summoned Jerusalem Affairs Ministers for interrogation.