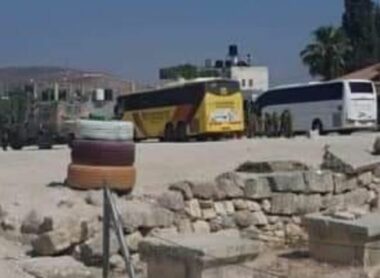 The Mayor of Sebastia, Mohammad Azem, said several army jeeps accompanied the colonists through the town, and headed to the archaeological area after sealing it off.

He added that the soldiers prevented the Palestinians from entering the site and all surrounding areas during the invasion.

The army frequently invades Sebastia Palestinian town, especially to accompany the colonists into the archeological area, an issue that leads to protests, injuries, and abductions of the residents.

In related news, the soldiers invaded the al-Biereh city, near the central West Bank city of Ramallah, and the al-Jalazoun refugee camp, leading to protests, especially after the army closed a road leading to the Industrial Zone.

The soldiers also fired gas bombs and concussion grenades at the protesters.