Israeli Soldiers Remove A Tent, Assault A Palestinian, Near Hebron 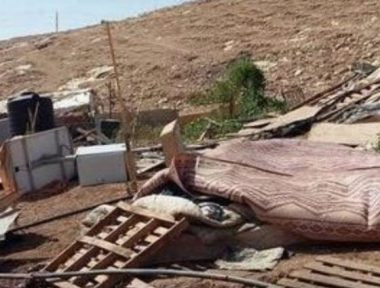 Israeli soldiers, accompanied by a number of illegal colonialist settlers, invaded a Palestinian land, Monday, removed a tent and assaulted a man, in Masafer Yatta area, south of Hebron, in the southern part of the occupied West Bank.

Rateb Jabour, the coordinator of the Popular Committee against the Annexation Wall and colonies, said the soldiers and colonialist settlers, removed a residential tent, owned by Yousef Abu Arram, and illegally confiscated wound meant for renovating a room used as a residence by the man and his family.

Jabour added that the colonists attempted to occupy the room, while the soldiers assaulted Bassel Mohammad Abu Arram, causing various cuts and bruises.